We took a trip down to Portugal’s underground treasures: Carpet & Snares Record Shop 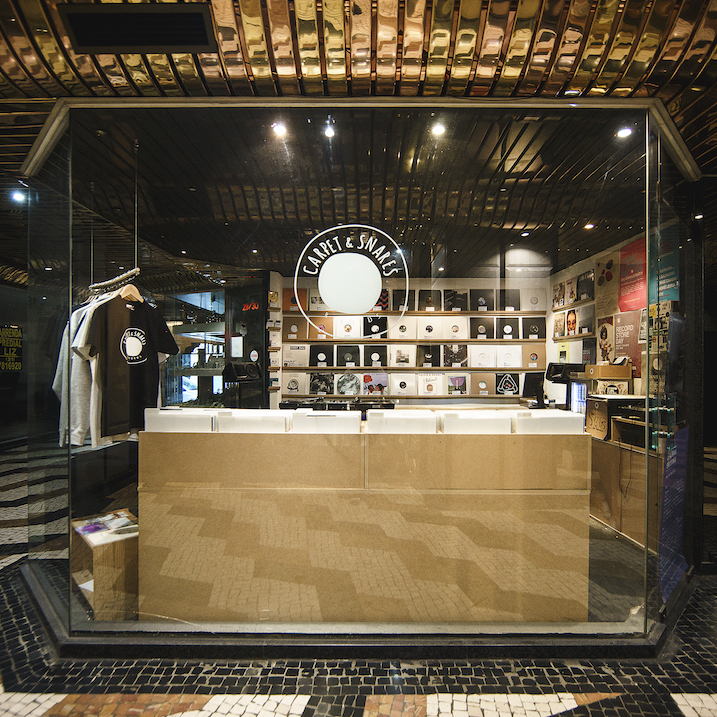 You’ll be amazed by the striking similarities between the Romanian and Portuguese languages, both sharing the same Latin roots. And even at opposites edges on this so called cradle of civilization we call Europe, both countries share also cultural values. Same feelings encapsulated in smooth waves of deep house, following raw basslines that could keep the groove steady & neat for countless hours. Sounds familiar, right?

Carpet & Snares is a record shop and label based in Lisbon. Focused mainly on electronic music, Carpet & Snares grew up as Jorge Caiado’s most complete project, slowly becoming of the hottest spots in Lisbon’s electronic underground. On the label side, Jorge has commited into promoting young Portuguese blood but not only, and at the same time coming with an amazing selection of records, to feed the local community’s passion for good music. Just to check what drives all the hard work around Carpet & Snares, we talked with Jorge Caiado about the Portuguese electronic underground, the business behind the record shop and the nuts & bolts of running a label

What’s your background when we talk about electronic music and its underground, especially?

JC: I started listening to house music, more specifically Deep and north american soulful house, when I was around 14/15, and I was lucky enough to grow up in a city (Póvoa de Varzim) with a good clubbing culture for the time, where the resident DJs still had an important role to play and fortunately were good. That was a great starting point for my relationship with dance music that ended up being indispensable in my life. At 18 I went to live and study in Porto where I studied sound engineering, and at 21, I moved to Lisbon to learn jazz (piano) and to try and strengthen my career as a dj and producer. In Lisbon I got a couple of residencies early on, like Frágil and Estado Líquido, and began to play in Portugal’s main clubs and festivals like Lux Frágil, Musicbox, Indústria Porto, Gare Porto, Neo-Pop, Waking Life, Nos Alive, SBSR, etc.)

After the move to Lisbon in 2010 I slowly began releasing music, making my debut on Chez Damier’s Balance imprint, where some years later I would have my own sub-label, Inner Balance. In Portugal I have Groovement as my “motherlabel”, and most recently Carpet & Snares Records, my main project which I’ll explain more about in a bit. During this time period I had the chance to remix some works from artists like Chez Damier, Terrence Parker, Orlando Voorn, Secretsundaze, and some more. In 2011 I was selected to be a part of RBMA’s international edition which happened in Madrid, where I had the chance to make music with Mathew Jonson and play before Frankie Knuckles. Two years ago I started my own radio show in the most influential electronic music fm radio station in Lisbon, Oxigenio. During all these years I was also involved with the creation of several events and festivals in Lisbon such as Lisboa Dance Festival and Lisboa Electronica. As Carpet & Snares Records we’ve also got a monthly residency at Europa, one of the main underground clubs in Lisbon, and it has been running non-stop for over 3 years. The idea with this night is to give a chance for a new generation of local djs (sometimes internationals) to gain some experience by playing for a proper crowd.

An interesting name for a record shop. How did you come with the idea of a record shop and what inspired the name?

JC: The idea came from one of our friends who suggested the name because the shop had just been carpeted and snares are pretty much ubiquitous in dance music. That’s where it came from.

Is it all about house & techno at Carpet & Snares? Are you focused on a particular genre?

JC: Well, I’d say 90% of the stock in the shop is House, Techno and Electro indeed. Those are the genres that we’re more into (and of course their sub-genres like Minimal, Deep House, Breakbeat, Dub Techno, etc) and where we invest most of our time digging and buying. We also have small sections for other dance and electronic music genres like disco, hip-hop, bass music and more abstract/leftfield records.

JC: Well, at the moment we’re 5 in total working in the shop, labels, distribution and agency. I’m a bit in every corner, also Rui Ferreira (aka Roy) that is my right arm in everything we’re developing here. In the shop Miguel Melo is our man behind the counter every afternoon and Hélio (from Pandilla LTD crew) is my man taking care of the logistics of the Distribution service. The fifth element is my sister – Adília Lima – and our art director taking care of the label’s design and also the artworks for the parties and all our events. Besides these people working on a daily basis we have some more help from Fábio Santos in the digital domain (websites, etc), from Rubén Jose in the video / films / documentaries extension we’re building slowly and from Joe Delon, who’s been helping us with the interviews for our mix-series.

Who’s doing the record selection for the shop? Are there any criterias you follow for the records available in store?

JC: I’m doing most of the buying by myself, Roy takes care of some smaller distributors and of course everyone give their tips about releases they think are important to have.

Are there any second hand records crates for the avid diggers?

JC: Yes, sure, more and more. We always bought collections when opportunities appeared in the past but more recently we’ve been able to buy more and more, so basically every week we update our crates with more new 2nd hand entries that spans from early 90’s obscure house and techno to 2000’s and more recent releases as well.

What are DJs digging for when they step into Carpet & Snares shop?

JC: Well, it depends the type of client we’re talking about. The frequent client (mostly Portuguese) comes mainly for the new entries, so basically every week they come to check what’s new. The tourist/international digger usually comes for exclusive material that we might have or distribute and to get a better idea about the Portuguese scene, artists, labels, etc. We’re receiving more and more people also looking to dig into our 2nd hand section.

After 5 years, I suppose you can already make a profile for a regular C&S customer… 🙂

JC: Yes and no. Our list of regular clients is not that huge and they are all different in their own way. I’d say that biggest slice of that list comes mainly for minimal and house, unfortunately techno djs here don’t play much often with vinyl and electro and other subgenres (UK oriented or more experimental) are still really a niche here.

Any chance we can find some Romanian releases to buy?

JC: Definitely!! As I said before, Minimal / Micro House / Romanian oriented house sounds are one of the main dishes in our shop. Records from Arpiar, Metereze, Moment, Amphia, Liniar, to name a few, always have space in our shelves. We actually just started distributing a new Romanian release this week through Carpet Distribution. You should definitely check Stoi’s release for the new Swedish label Continue Records.

Carpets & Snares is also a record label with a few variations. What’s the story behind the label and all the sublabels?

JC: Well, the main catalogue started in 2017 and the focus (that remains) was to push for the local artists always with a strong reference in the remix duties. Last year we decided to expand and start other series directly connected to the main catalogue but from other international artists and from other genres that were not being covered in the main catalogue. So that way we started the Patterns series (more minimal, stripped down house grooves), the Steps series (for UKG and all the breaks variations), the Steam series (our techno outlet), the Circuits series (for more detroit-ish and analogue jams that can goes from techno to more ambient and abstract). Roy kicked his own Dream Ticket last year and its mainly focused into electro and techno-ish/acid sounds. We also did already our exclusive Record Store Day release that want to maintain for the next years. Besides all this we have some new ideas in the pipeline to come out soon!

Do you release only Portuguese artists?

JC: No. In the main catalogue thats the key criteria, but since we have been receiving so much good music from friends from other countries and really good demos we decided to open the gates to everyone.

What’s cooking hot right now in Lisbon’s house & techno underground? Give us some tips about producers and record labels from the local scene. Also, some venue we can enjoy some quality deep house with a touch of minimal 🙂

On the clubs field I’d highlight Europa (where we do our monthly party), Village Underground Lisbon, 5A club (the new micro club in town) and of course Lux-Frágil (for being one of the best clubs in the world and opened for more than 20 years).

Every Monday to Friday from 12 PM to 8 PM